Thomas Hobbes, regarded as one of the greatest English political philosophers, is possibly most famous for his idea of the “social contract”. This theory argued that rational people would agree between themselves how politics and business should be run. Unfortunately, Hobbes extrapolated from this idea to justify the concept of a sovereign and all-powerful state and the principle that the ‘people’ should subjugate themselves to the absolute power of the state whilst leaving it to exert unfettered power in its own self-interest. Hobbes’ theory has been largely discounted however the concept of ‘contractualism’ remains as a powerful bond in our democracy.Over time the interests of the state and those that provide funding to the state have become inter-mingled. This mixing of self-interest means that we now accept without question the concept that the accumulation and protection of great private wealth using the policies of the state is somehow equivalent to the protection of the state itself on behalf of us all. It is also, perhaps, why we accept that the politicians responsible for regulating and managing the economies of the US and Europe are usually former managers of the largest and most powerful global financial institutions. 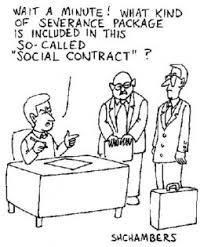 Now that the political class are almost indiscernible from the financial class we have allowed the banks to carry out reckless activity in the pursuit of extraordinary profit only to find that when the risks are mismanaged the state in the form of the public purse has to rescue the institutions and the system – in the case of the UK to the tune of £1 trillion. This is not liberal democracy in operation this is pure feudalism – with the extremely wealthy excoriating the poor and middle class by forcing them to underwrite the bankers’ mistakes.
(Not) talkin’ about a revolution
“Experience demands that man is the only animal which devours his own kind, for I can apply no milder term to the general prey of the rich on the poor.” Thomas Jefferson
Since the financial crisis in 2008, bankers have continued to pay themselves “bumper bonuses”. But hang-on, what money are they using to pay these incredible rewards. They owe us £1 trillion and people all over the country are paying for this debt with their jobs and their homes. Why is it that neither David Cameron nor Ed Miliband can see that the paying of huge private rewards in the £billions each year after the country mortgaged itself for a generation is a disgrace and should be stopped.
None of the people who have lost their jobs or their homes were offered an opt-out from this banker induced recession. We have been forced to suffer for the mistakes of a wealthy and politically powerful elite.  Where is the political backbone of our elected representatives to properly reform this appalling system?
This is not a call for a socialist revolution; this is a cry for democracy.
Related Articles: