You couldn’t make it up… but one of us did!**
(Modified Image: Original Image via Telegraph)

In case you were wondering whether David Cameron lied to you about the evidence not being 100% to support the plain packaging for cigarettes policy – he did.  Read this from Cancer Research UK (some formatting modified by me for emphasis).

“Why do we need standard packs? 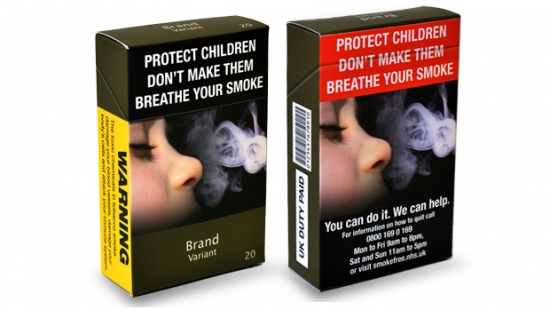 Cigarette packs are designed to be attractive and communicate the ‘personality’ of a brand.

Our evidence shows that removing branding from cigarette packaging will reduce the attractiveness of tobacco products to children. It closes the advertising loophole tobacco companies exploit to market their deadly products.

An Executive from a large tobacco company said: “Our final communication vehicle with our smokers is the pack itself. In the absence of any other marketing messages, our packaging is the sole communicator of our brand essence. Put another way: when you don’t have anything else, our packaging is our marketing.”

For more evidence and study findings read our full report on ‘The Packaging of Tobacco Products’ (PDF, 3,828KB) brought together by the Cancer Research UK funded Centre for Tobacco Control Research.

In an interview leading industry analyst Adam Spielman estimated that plain, standardised packaging will halve tobacco industry profit margins. It’s therefore unsurprising, that an international tobacco company have stated “we don’t want to see plain packaging introduced anywhere regardless of the size and importance of the market.”

Read this interview. In the late 1990s legal action in the USA led to internal tobacco industry documents being released. At the same time, the House of Commons Health Select Committee investigated internal documents from the UK tobacco industry’s main advertising agencies.

These documents show that tobacco companies have been investing in pack design to ensure that their products are appealing to young people. They also provided evidence of the importance around recruiting new smokers. This is because of the high brand loyalty to the first brand smoked, and the low rates of switching brands.

Of course for David Cameron this evidence is not 100% but then he has less than 100%  certainty that austerity is the way to resolve the deficit and he’s doing that at a greater cost to the nation and her citizens.

CAMERON SHOULD STOP PANDERING TO LYNTON CROSBY AND HIS TOBACCO AND PRIVATE HEALTHCARE CLIENTS AND START SERVING THE BRITISH PEOPLE RATHER THAN NARROW CONSERVATIVE PARTY INTERESTS.

PEOPLE WILL DIE BECAUSE OF HIS DECISION TO KICK PLAIN PACKAGING INTO THE LONG GRASS. HE SHOULD FEEL ASHAMED – BUT I DOUBT THAT HE WILL.

** Today Lynton Crosby issued a statement and what follows is an important extract as reported by BBC News Online:

Mr Crosby said: “What the PM said should be enough for any ordinary person, but to avoid any doubt or speculation let me be clear. At no time have I had any conversation or discussion with or lobbied the prime minister, or indeed the health secretary or the health minister, on plain packaging or tobacco issues.

“Indeed, any claim that I have sought to improperly use my position as part-time campaign adviser to the Conservative Party is simply false.”

For the record, I find it incredible that this would be true given how evasive David Cameron has been over the last 10 days or so when asked repeatedly by multiple journalists and Ed Miliband in the House of Commons to be clear as to whether Lynton Crosby had any influence over the tobacco packaging decision.