The Daily Mail has a rather haphazard and nonchalant approach to reporting the results of research and statistical data in general. This would be laughable if it was not potentially so dangerous.

I was reminded of this gloomy fact in the early hours of this  morning when I noticed the following Tweet: 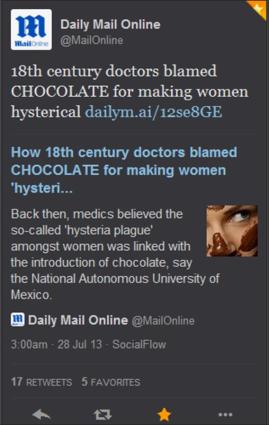 It’s a bit rich of the Mail to have a chuckle at ridiculous medical ideas of the 18th century given the claims that it has made in the 21st.  For example, over the years the Mail has editorialised with some vigour against the MMR jab producing headlines such as “MMR killed my daughter”; “MMR fears gain support”; “New evidence ‘shows MMR link to autism'”; “MMR safe? Baloney” and many, many more. In the person of its right wing superstar of bad science, Melanie Phillips, it has almost certainly caused untold illness and risked the lives of children worldwide through the dogged and ultimately disastrous attempt to ‘prove’ that MMR caused autism or was in some other way bad for children.

The Daily Mail was by no means alone in its belief that MMR caused autism but it was a leader in spreading bad science and misinformation to its readers with Phillips at the forefront of its campaign.  Even in the face of overwhelming evidence against her position Phillips refused to acknowledge that she was wrong arguing “There are strong arguments on both sides” – of course this was untrue but her readers, I am sure, assumed that it must be true, as she wrote for a national newspaper and many would have taken her ‘advice’. She also used her column to praise Andrew Wakefield, the discredited former doctor, and draw him as a rebel whom had been wronged by the medical establishment.

Now you may feel that an opinion sheet (I do not believe Daily Mail output is deserving of the moniker ‘newspaper’) taking a principled stand on an issue is fair enough; especially when other similar tabloids frequently fail to demonstrate the strength of their convictions on any given issue with comparable doggedness –  and I would be tempted to support your view.  After all, although it was some time ago, it was largely the prolonged campaigning of the Daily Mail that ultimately resulted in two convictions for the killers of Stephen Lawrence (that is not to belittle the concerted efforts of Doreen and Neville Lawrence whose raw courage and strength of will was inspirational throughout).

But consider how disingenuous it would be if the same media group campaigned about certain vaccinations being bad for the children in one country, say the UK but at the same campaigning in, Ireland, for the funding of the same vaccination to be undertaken by the government.  It couldn’t happen, right? Wrong! Here’s what British physician, academic, science writer and self proclaimed “nerd evangelist Ben Goldacre had to say on this subject:

In fact they even have a graphic, with the Daily Mail logo and everything. Like something from a parallel universe, it reads: “Daily Mail Campaign: Roll out the vaccine now!” Presumably the reasoning is to attack any government healthcare decision, by pretending it is medically dangerous.” Full Blog entry here.

Whatever the Mail’s motivation for campaigning on vaccinations this shows that it’s unlikely to be scientific research.  By the way, this is also the approach that the Mail is taking with the recommendations made by Lord Leveson in respect of reining in the excesses and unethical/criminal behaviour of our press in recent years.  In the UK they oppose it and use their paper and website to criticise the outcome and campaign for less rigorous  oversight than the Leveson Inquiry  recommends. However, in Ireland where very similar regulations are in place the Mail is happily compliant with the regime and as far as we are aware free speech has not been curtailed and the heavens have not fallen in on the Irish.

It seems that the Mail lacks a moral compass but this is made up in part by it being able to use its two faces to look in opposite directions at the same time.

As well as allowing opinionated but unqualified ‘science abusers like Phillips to mislead its readers the Mail has also listed what seems to be almost every object and food stuff known to mankind as a cause of or a cure for cancer (and often both!).

Goldacre is well known for his campaigning against “Bad Science” and irrationality. Unsurprisingly he does not appear to be a fan of the Mail’s journalism and had this to say about its various cancer related articles:

“The Daily Mail, as you know, is engaged in a philosophical project of  mythic proportions: for many years now it has diligently been sifting  through all the inanimate objects in the world, soberly dividing them into the ones which either cause – or cure – cancer”

Everything Gives You Cancer! Even The Stuff That Prevents Cancer According To The Daily Mail

I felt compelled to respond to the Mail’s Tweet with something suitably pithy (see Tweet above) but in the course of gathering some data I discovered a website called “Kill or Cure?  Help to make sense of the Daily Mail’s ongoing effort to classify every inanimate object into those that cause cancer and those that prevent it“.

Paul Battley (@threedaymonk) has collated Daily Mail articles about causes/cures for cancer submitted by the public into a summary so that “we all know how best to live our lives according to the Mail.”

How ironic that this ‘faux news’ organisation invites us to laugh at chocolate as a cause of hysteria now that we know that it is the Daily Mail that may be the single biggest cause of irrational hysteria over health (among other things) in the UK.