From time to time I have found myself cornered or chided into a debate about immigration with the fruitloops and (occasionally closeted) racists in the increasingly pernicious UKIP or the Tea Party wing of the Conservative’s.  It can be frustrating to hear the same three myths put forward each time as reasons for restricting immigration and to then not be able to recall the relevant details that would sink these lies (why beat around the bush with euphemisms?).

Now you can arm yourself with three clear unequivocal objective facts.  You need only remember these key pieces of information and you can exude the quiet confidence of the knowledgeable as you destroy the foundations of any ‘fruitloopery’ that might present itself on social networks, at the local pub or on the message boards of the Mail and Express.

So what are the myths and the counterfactual data?

What can we conclude from debunking these myths?

Oddly, not one of our main party leaders has been interested in placing these facts before the British public preferring to play up the Daily Express, Daily Mail and other (mostly) right wing media sources anti-immigrant mythologies. 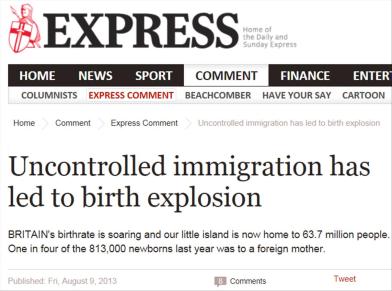 Why Does The Express See A Factor Of 25% As The Primary Driver Of The UKs Birth ‘Explosion’ Rather Than The 75%? It Is Illogical And Designed To Heighten A Fear Of Foreigners That The Express Has Played A Significant Role In Creating

My thoughts on the subject are very simple. Due to a ‘successful’ anti-immigrant media campaign waged over decades, a large minority of the British electorate now believe viscerally that UK inward migration has had a negative impact.

Thus there are few votes in pro-immigration rhetoric even when immigrants are verifiably and incontrovertibly an economic and cultural benefit to the UK.  Additionally, maintaining fever pitch levels of fear and hate of Johnny Foreigner is a useful tool for keeping our anger and attention focussed on a fake problem whilst the government enact and obfuscate all manner of questionable policies that address ideological goals and not the real and fundamental issues that face the UK.

I would say that David Cameron, Nick Clegg and Ed Miliband should be ashamed that they have pandered to UKIP supporters in this way but that would mean that I believe that they care about placing objective and verifiable evidence above ideology and their quest for power when formulating policy. I don’t.