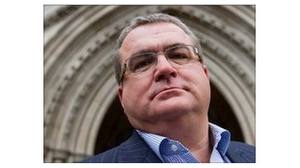 “Naturally offensive, abusive and gratuitous having no factual content or justification” – that’s Jon Gaunt for you (Image: BBC.co.uk)

“Jon Gaunt is a pillock” is an hypothesis that I have been reflecting on for some time.  It first came to mind in 2008 when ‘Gaunty’ (as he likes to refer to himself) in an interview with Redbridge Council‘s Michael Stark branded the councillor a “Nazi“, and “an ignorant pig” live on air in a discussion about whether smokers should be allowed to foster children in care.  According to Wikipedia he had criticised Redbridge Council in similar terms in his Sun newspaper column that morning.

His employer at the time was Talksport who immediately fired the obese broadcaster and Gaunty appealed but failed to get his job back. Ofcom opined that “The broadcast was undoubtedly highly offensive to Mr Stark and was well capable of offending the broadcast audience.”

“human rights case for the sake of “all broadcasters”, before turning his attention to suing Talksport for terminating his contract. In January 2010 he won the right to appeal against Ofcom on the grounds that it had breached his right to freedom of expression. The case returned to the High Court of Justice on 15–16 June 2010, but on 13 July it was announced that Gaunt had lost his case, the judge upholding Ofcom’s decision and concluding that “the offensive and abusive nature of the broadcast was gratuitous, having no factual content or justification“. Human rights group Liberty intervened in the case because of its “wider importance to free speech”, but Gaunt’s decision to appeal the judge’s ruling was dismissed in the Court of Appeal in June 2011. (Wikipedia)

In August 2010 Gaunt became the official spokesman for the EU Referendum Campaign and in March 2013 Gaunt joined the UK Independence Party.

So my hypothesis was fully formed and in no real need of further evidence to confirm it as a workable theory when along Gaunty came to appear on my favourite Sunday morning show (the intellectually stagnant Sunday Morning Live).  As you will see in the video clip below (in order to read the captions it is best viewed in full screen mode) he did his best to live down to my expectations.

Christina Patterson – Money for nothing…

“But what of Christina Patterson?” you may well ask. Until Sunday I had never heard of the woman but as you will also see, she is another numpty with very strong opinions that she puts forcefully and which appear to be based on a particularly superficial level of knowledge. Apart from repeatedly saying “I agree” as Jon Gaunt drones on mindlessly and that being “half-Swedish” means that she can speak on behalf of the Swedish government and judiciary, she sounds especially stupid when, mid-discussion, she tries to criticise the only sensible studio guest on the programme, Tariq Ali, for going off point saying “We are talking about heroes and villains…” Err no you were not; you were debating “Do whistleblowers risk our security?” Approximately 6’26” into the segment Ms Patterson blithely dismisses the value of the shocking and disgusting facts released by Wikileaks saying “some of what has been revealed is probably worth us knowing”; here are a few of those potentially worthwhile revelations:

“Manning’s leaks included more than 700 Guantanamo detainee files, many revealing that the U.S. had little reason to continue holding its prisoners. The 250,000 State Department cables he leaked detailed U.S. diplomatic pressure on foreign countries to ignore or excuse extraordinary renditions carried out by the CIA in apparent violation of international law. They also showed that the U.S. routinely failed to investigate reports of prisoner abuse and summary execution by the Iraqi military.

“…with everything that Manning released, to some extent the volume of the material is part of the story. It’s one thing to tell a few anecdotes based on a few items being leaked, but to be able to say across the board that most of the men who are there shouldn’t be there, were people that could be safely released … that is pretty staggering.” Shane Kadidal, a lawyer at the Center for Constitutional Rights who represents Guantanamo detainees in June.”  (Huffington Post)

The most disappointing aspect to all of this is that the ignorance of these two ‘commentators’ misled the viewers and may well have resulted in lending credence to the idea that Chelsea Manning and Edward Snowden were egoists hell bent on celebrity at the cost of the lives of intelligence officers and others whose names or identities had been revealed by the whistleblowers’ breach of confidence. None of that is true and that much is made clear from the rebuttal put forward by the only guest on the show with direct knowledge of the events Professor Gavin MacFadyen, Director of City University’s Centre for Investigative Journalism, who was given less than 90 seconds of air time in this otherwise facile debate.

Sunday Morning Live is, at best, a bland idea for a show about ethics, morality and religion but its choice of guests and its shoddy editorial approach means that it only serves to mislead its viewers and fails every week to shed any light on the critical subjects that it claims that it is seeking to explore.

This annual summertime lull in intellectual substance on TV cannot end too soon.

Just for a bit of fun here’s the despicable one rowing with Hugh Grant and Dame Shirley Williams and trying to defend the practices of the Red Top opinion sheets and a continuation of an unregulated gutter press rather than Leveson style oversight on Question Time in 2011.

2 thoughts on “Do whistleblowers risk our security? Jon Gaunt and Christina Patterson don’t know but the BBC wastes our time and licence fee paying them to find out (video)”