Part One: ObamaCare and The Threat Of A Shutdown

Many of us in Europe could be excused for wondering why our American cousins are having such a spat about President Obama’s insistence on the introduction of his singular presidential achievement to date the Patient Protection and Affordable Healthcare Act aka ‘ObamaCare’. 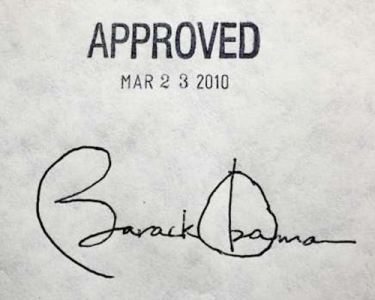 Having been the beneficiaries of state supplied health services free at the point of use and from cradle to the grave what Americans call ‘socialised’ healthcare is considered by most of us in Western Europe to be a fundamental right and a symbol of a civilised society.  This is  not the case in the United States.  Consequently,  the United States Census Bureau, says that there were 48.6 million people in the US (15.7% of the population) who were without health insurance in 2011.

The causes of this rate of uninsurance remain a matter of political debate. Rising insurance costs have contributed to a trend in which fewer employers are offering health insurance, and many employers are managing costs by requiring higher employee contributions. Many of the uninsured are the working poor or are unemployed. Others are healthy and choose to go without it. Some have been rejected by insurance companies and are considered “uninsurable”. Some are without health insurance only temporarily. Some choose faith-based alternatives to health insurance.

ObamaCare was created to address, at least in part, the problem of those who need health insurance but are unable to afford it or are uninsurable due to e.g. a chronic and/or acute pre-existing condition. Before we look at the “shutstorm” that has taken place over the last few weeks, it would be helpful to have a quick reminder of the key points of ObamaCare.

There are really only a few things you need to know about the Affordable Care Act.

• The Affordable  Care Act  contains over a thousand pages of reforms to the insurance industry and the health care industry in order to cut health care costs and to provide affordable health insurance to all Americans.

• Before the law you could be denied coverage or treatment because you had been sick in the past,  be charged more because you were a woman, be dropped mid-treatment for making a simple mistake on your application, and had little or no way to fight insurance company appeals.

OK. So now you have the basics, here is President Obama explaining the policy earlier this year:

The Republican party and the “bug-up-its-ass” known as the Tea Party are rabidly against ObamaCare. claiming that it is “anti-choice, anti-consumer and anti-patient”. To get a sense of the issues here’s a clip from the Presidential debates last year:

So ObamaCare has been on the US statute books for a few years now but, due to concessions that Obama was forced to make to ensure that the law was passed, it only went live on 1st October.

Even so a number of states where the Republicans are in control of the legislature and/or hold the Governorship, driven largely by Tea Party agitators, are either refusing to institute the law or are using every possible loophole to delay its introduction.  Here’s Jon Stewart:

Due to copyright restrictions in order to watch the clip you need to type or copy and paste the password: imincorrigible
Video © Comedy Central

So the battle lines are clearly drawn but before we get ahead of ourselves let’s remember a fundamental point. Obamacare is already law. It was passed by both houses and signed into law by President Obama in 2010. Subsequently, the law was challenged as unconstitutional, a claim dismissed by the US Supreme Court and has since been voted against 41 times (yes 41 times!) in congress by the Republicans. These congressional votes were merely grandstanding and had no legal force as any repeal would need to be passed by the senate and even then would almost certainly be vetoed by the President. However the votes wasted considerable congressional time at the expense of other more meaningful business.

The last session of Congress, the 112th, was the most unproductive ever (or at least since 1948, when we started measuring these things). Six months in, the 113th looks like it could be even worse (or better, depending on how you view what Washington should — or shouldn’t — be doing.)

Twenty-two bills have been passed by Congress and sent to President Obama for his signature since Congress convened in January. That’s a little less than the 28 passed by August in the previous Congress, and a pretty poor output compared to earlier sessions.

The 104th Congress (in 1994) had also passed 28 bills by this point in the session; Republicans had taken control of the House that January and were butting heads with President Clinton.

“Part 2 – The Shutdown” will follow soon but if you are wondering if this whole crisis will be repeated in three months time and how it will all end consider what “super-incumbent” really means, how it may affect US style democracy and whether the ‘framers’ of the US Constitution really intended things to turn out this way:

The main advantage of the Affordable Care Act is that it lowers health care costs overall by making insurance affordable for more people. That’s because insurance will be extended to two uninsured groups. First, it will include many more younger people, who are healthier. This lowers costs overall because they’ll pay premiums, but won’t use as many services. Second, insurance will become available to people who now use expensive hospital emergency room treatments instead of going to a primary care physician. This lowers costs because they will have their conditions treated before the expensive critical stage.

Another advantage is it provides insurance more fairly. Prior to the Act, only people who fell into one of four categories could get affordable health care:

If you don’t fall into one of those categories, you are forced to pay for health care out of your pocket. If you can’t afford it, either the hospital must pick up the cost, or you must declare bankruptcy. The U.S. system was set up this way when the Federal government gave tax breaks to companies who provided health insurance for their employees.

The main disadvantage is that the Act could actually increase health care costs over the short term.  That’s because many people will receive preventive care for the first time in their lives. This could lead to treatment of heretofore unknown illnesses, driving up costs. (Source: CBO, 2009 Study on Preventive Health Care, August 7, 2009)

Most of the disadvantages are accruing to those individuals and businesses that are paying higher taxes. In addition, somewhere between 3-5 million workers could lose their existing, company-sponsored health insurance if their company finds it more cost-effective to let them buy it on their own and pay the penalty. For details, see Obamacare Pros and Cons.

The cost of Obamacare has been listed as both a pro and a con. That’s because the calculation depends on the assumptions used. Estimates ranging from $1.76 trillion added to the debt down to $143 billion subtracted from the debt are all correct (in their own way). Find out how in Cost of Obamacare. Article updated October 1, 2013