In Nigel Farage’s alleged apology to the Romanian people for being racist, he repeated the allegations he made about Romanian’s and crime. The three main points he made were headline catching but all were, typically, wrong.

Below is a summary of Channel 4’s FactCheck of Farage’s slurs about Romanian crime in the EU and the UK. 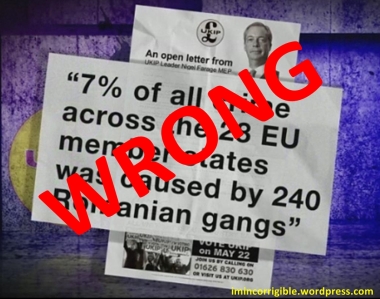 WRONG! None of UKIP’s claims about Romanian crime are accurate

FactCheck: is there a Romanian crimewave?

Nigel Farage has expressed regret over remarks he made about Romanian immigrants last week.

The Ukip leader told LBC Radio: “I was asked if a group of Romanian men moved in next to you, would you be concerned? And if you lived in London, I think you would be.”

He later told BBC News: “I didn’t use the form of words in response that I would have liked to have used.

“I should have just hit back immediately and said: ‘Look, understand there is a real problem here – you can’t deny it – too much criminality from these gangs has come to London.’”

In 2012 Det Chief Insp Paul Barnard, then head of Dedicated Cheque and Plastic Crime Unit, told an ITV documentary: “The fact is 92 per cent of all ATM fraud we see in this country is committed by Romanian nationals. Very, very tight communities, very tight gangs.”

We contacted the unit about this last year and they were unable to share any underlying data with us, but told us the figure was “based on police intelligence”.

The 92 per cent figure is very similarly to one attributed to analysts at the EU law enforcement agency Europol by a Times article last year.

The newspaper said: “Crime analysts at Europol estimate that Romanian and Bulgarian gangs are responsible for 90 per cent of all card-skimming crimes across Europe.”

Again, hard underlying data is lacking here, and note that we are lumping Bulgarians and Romanians together now, whereas Mr Barnard was only talking about Romanians. But he’s obviously not the only policeman linking the country to this type of crime.

Interestingly, when the Metropolitan Police released this interesting Freedom of Information answer covering 2012, they found that only 5.8 per cent of people arrested for fraud in London that year were Romanian.

It’s difficult to know what to make of this: “police intelligence” isn’t the same as real numbers for arrests or convictions, but equally it could be that low arrest statistics don’t reflect the real size of the problem.

Note that these Met figures do suggest that Romanian nationals are disproportionately more likely to be arrested for certain other types of crime in certain locations: almost half the beggars arrested in 2012 were Romanian across London and in one London borough, Westminster, the proportion was 70 per cent.

“28,000 Romanians were arrested in the last five years in the Metropolitan Police area alone”

This number is accurate (it’s 27,725, to be precise) and comes from another Met Police Freedom of Information release. This is based on the nationalities people use to describe themselves when arrested, hence the inclusion of a number of “countries” that no longer exist (the Irish Free State, British Central Africa) or indeed have never existed (Yanam).

The data has been very widely misreported and indeed Mr Farage got it slightly wrong again in today’s Telegraph ad.

The figure of 28,000 is for the number of arrests made over five years from 2008 to 2012, not the number of people. One shoplifter can be arrested and re-arrested dozens of times and each one of those arrests counts towards this total.

But of course this applies to all countries, and compared to others, Romania does not come out of these arrest figures covered in glory.

Only Poland saw more arrests of its citizens over those five years (nearly 35,000) and there are likely to be many more Poles living in the Met Police area.

We can’t be precise about this because the next population survey doesn’t come out until August next year (recent estimates from the Labour Force Survey suggest there are in the region of 180,000 working age Romanians in the whole of England, but there are big margins of error here).

Unless our estimates of the likely Romanian population in the capital are out by an enormous amount, it is safe to say that the average Romanian is more likely to be arrested than the average Pole.

The country’s ambassador to the UK, Dr Ion Jinga, has been at pains to point out that arrests are not the same as convictions, which is quite right.

He has released figures showing an apparent recent fall in the number of criminal convictions among Romanian migrants.

We haven’t managed to track down figures for criminal convictions by nationality (we’ll update if we do), but the Ministry of Justice gave us stats on the numbers of foreign prisoners in jails in England and Wales.

On March 31 this year there were 588 Romanian nationals in prison here out of a total prison population of 85,265 – so 0.7 per cent were Romanian.

A year earlier there were 671 Romanians behind bars in England and Wales out of 83,769 prisoners. That’s 0.8 per cent.

While the number and rate has dropped slightly, Romanians remain the fourth most numerous foreign group in the prison system, behind Poland (898 inmates) , Ireland (778) and Jamaica (711).

This stems from the same Times article mentioned above. Europol director Rob Wainwright was quoted as saying that about 240 organised crime groups from Romania have been identified by Europol, accounting for 6.7 per cent of the total number of criminal networks active in Europe.

Note that this refers to the numbers of criminals, not the amount of crime committed.

It may be a source of concern that Romanian gangs have a lot of manpower, but it’s not true to say that 7 per cent of all EU crime is carried out by those gangs.

Nevertheless, we ought to say that the Ukip leader is not plucking these claims of criminality out of thin air. They are based on real statements put out by various police forces, some of whom have real concerns about the activities of Romanian wrongdoers.

Met figures show that Romanians are disproportionately more likely to be arrestedcompared with the citizens of many other countries.

And Ministry of Justice figures similarly show that while the number of Romanians in UK prisons has fallen slightly over the last year, the number still remains large as a percentage of the likely total Romanian population.

“Everyone is entitled to his own opinion, but not to his own facts” Senator Daniel Patrick Moynihan

If you want to know the objective facts about the EU, you can download the Regents report here: The UK & Europe: Costs, Benefits, Options Regents Report 2013.  this is what The Observer said about the report back in November: