Almost exactly a year ago, the core argument used by right-wingers around the world to justify accelerated budget deficit reduction, Reinhart and Rogoff’s “Growth in a Time of Debt”, was fatally undermined by Thomas Herndon, an economics graduate student, when he discovered a number of errors in the Harvard professors’ data.

Despite the fact that, in this case, the theoretical basis for deep and rapid spending cuts was proven to be unfounded most conservative governments including our own in the UK pressed on with fiscal consolidation regardless.

So it was with some relish that, when Chris Giles of the Financial Times published what he thought were similarly material errors in Thomas Piketty‘s data-set, the right-wing in the US and the UK sharpened their knives and set to work in an attempt to destroy Piketty’s widely acclaimed work “Capital in the Twenty First Century”.  Piketty’s theory, which concludes that high wealth taxes should be levied on the super rich, has gained some traction around the world and this is not going down very well with the political right and the super rich that fund right-wing parties and think tanks.  Consequently, Piketty has been on (another) world tour accepting invitations to be publicly examined about these alleged errors. 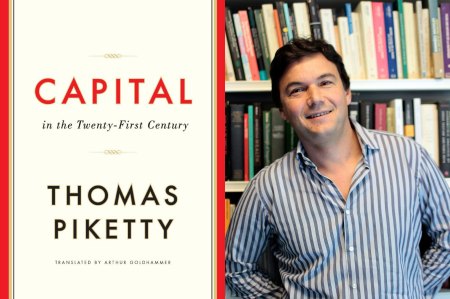 On Tuesday Channel 4 News invited Thomas Piketty on to their show to debate the efficacy of his work. For reasons best known to themselves, he was asked to debate not with another economist of good standing or his foremost UK critic, Chris Giles of the Financial Times, but instead with an apparent trainee from the ultra right-wing and wildly misnamed Institute for Economic Affairs.

Looking to all the world as if he had accidentally stepped out of his creche and into the studio, the IEA’s Ryan Bourne had prepared for the interview in much the same way as many 15 year olds prepare for their GCSE’s.  He read some ‘Cliff Notes’ of other people’s criticisms of Piketty’s work and boy was he going to use them.

The result was as inevitable as it was unedifying.

Viewers of the Channel 4 News debate would have learned next to nothing about the detailed criticisms levelled at Piketty’s work however in the next clip Tim Harford and the BBC’s More Or Less programme are on hand to shed some light on the subject and to answer the question “is Piketty’s theory flawed?”.

Business Insider have argued that Justin Wolfers‘ explanation of Piketty’s work and why it remains valid despite the best efforts of the right to rubbish it in the MSM, is the “best” explanation that they have seen.  Wolfers’ presentation can be found here: PikettyJustin Wolfers presentation

Everyone’s been talking about rising inequality in the U.S., spurred on by the massive popularity of French economist Thomas Piketty’s book “Capital in the 21st Century.”As much attention as it’s received, it’s also come in for some criticism.

The core fact of income inequality doesn’t seem to be in doubt. Indeed, the FT, which found flaws in Piketty’s use of some data, never questioned this element specifically. But Piketty’s assertions on wealth, and his conclusions about the nature of capitalism, continue to be called into question.

Now, Michigan professor and New York Times contributor Justin Wolfers has laid out the state of the rest of the Piketty debate in a wonderful presentation posted to the NBER.