Mark Regev, the chief spokesman for the Prime Minister of Israel, is the country’s go to guy when it comes to trying to defend the indefensible to the world’s media.  Yesterday he managed to reach a new low following Israel’s attack on a United Nations school based in Gaza where it is reported that around 1,000 civilians were sheltering from the Israeli Defence Force’s ongoing bombardment.  The UN, which announced on Wednesday that it plans to launch an investigation into possible war crimes during the conflict, told the media that it had requested  a ‘window’ to evacuate civilians from the site before the IDF commenced it’s latest assault but this was not granted by the Israeli’s.

Chris Gunness, spokesman for the United Nations Relief and Works agency said there had earlier been “firing around the compound” and his organisation had asked the Israeli army for time to evacuate civilians. “We spent much of the day trying to negotiate or to coordinate a window so that civilians, including our staff, could leave. That was never granted … and the consequences of that appear to be tragic.” Gunness said the Israeli military were supplied with coordinates of UN schools where those displaced were sheltering. UN sources told the Guardian a call was placed to the Israeli military at 10.55am requesting permission to evacuate but their call was not returned.

Whatever the truth, 15 Palestinians were killed and a further 200 were injured by the IDF and most of those injured were women and children.  So last night, Israel rolled-out Regev to regurgitate Israel’s predefined and jaundiced view of the incident.  However, this time he came seriously unstuck when he met more than his match in the form of  Newsnight’s Emily Matlis. 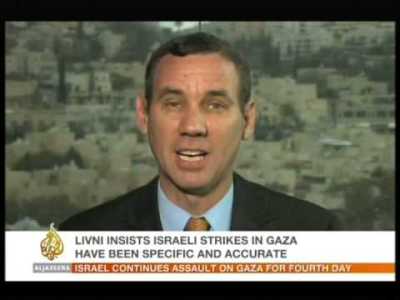 Regev in 2010: Every time Israel kills Palestinian civilians the world’s media is treated to the same excuses from the same mouthpiece

[This post is in draft form – further text follows]