The compelling and chilling account of a former Israeli Defence Force soldier about his time in Hebron.  This is a video that everyone should watch.

Re-blogged from Digital Resistance: “Ex-Israeli soldier speaks out… what he says will change everything you think you know about Israel!” (originally published 23 July 2014)

The talk by Eran Efrati was filmed in Denver, Colorado on March 3, 2014 as part of The Soldier and the Refusenik U.S. tour with Maya Wind. Eran talk about his experiences in the IDF and then more broadly discusses Israel, its relationship to the U.S. and the global expansion of militarism.

Video © Digital Resistance
With thanks to @emilbordon

Eran Efrati, 28, was born and raised in Jerusalem. After graduating high school he enlisted in the IDF, where he served as a combat soldier and company sergeant in Battalion 50 of the Nachal Division. He spent most of his service in Hebron and throughout the West Bank. In 2009, he was discharged and joined Breaking the Silence, an organization of veteran Israeli soldiers working to raise awareness about the daily reality in the Occupied Territories. He worked as the chief investigator of the organization, collecting testimonies from IDF soldiers about their activities. He also guided political tours and to the West Bank and worked to educate Israeli youth about the reality of being a soldier in an occupying army. His collected testimonies appear in the booklet “Operation Cast Lead” and their most recent release “Our Harsh Logic”. Since leaving Breaking the Silence, his investigative reports appeared in The New York Times, The Washington Post and The Guardian. Today he is active with the Israeli groups Anarchists Against the Wall and Boycott from Within. 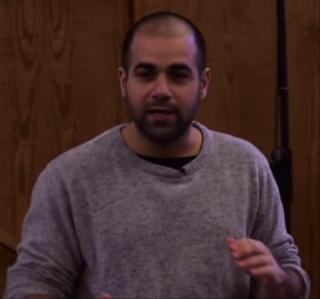 Key points from this lecture

Digital Resistance: “Ex-Israeli soldier speaks out… what he says will change everything you think you know about Israel!”