So that was the story up to Sunday.  Then yesterday the Brown family’s lawyers called a press conference to try to explain to the world the basis of their complaint of a lack of transparency against the Ferguson police and justice system.  In particular, they were keen for America to know the cause of Michael Browns death as established by the preliminary findings of an independent pathologist appointed by the Brown family.  Lead council Benjamin Crump described Brown’s death as an “execution” and on this initial evidence it is difficult to disagree.

THE shooting of Michael Brown, an 18-year-old African-American, by a police officerin Ferguson, Missouri, is a reminder that civilians—innocent or guilty—are far more likely to be shot by police in America than in any other rich country. In 2012, according to data compiled by the FBI, 410 Americans were “justifiably” killed by police—409 with guns. That figure may well be an underestimate. Not only is it limited to the number of people who were shot while committing a crime, but also, amazingly, reporting the data is voluntary. 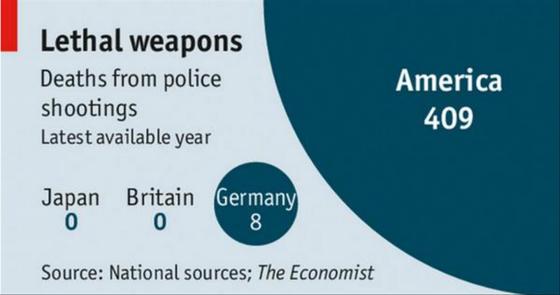 Last year, in total, British police officers actually fired their weapons three times. The number of people fatally shot was zero. In 2012 the figure was just one. Even after adjusting for the smaller size of Britain’s population, British citizens are around 100 times less likely to be shot by a police officer than Americans. Between 2010 and 2014 the police force of one small American city, Albuquerque in New Mexico, shot and killed 23 civilians; seven times more than the number of Brits killed by all of England and Wales’s 43 forces during the same period.

The explanation for this gap is simple. In Britain, guns are rare. Only specialist firearms officers carry them; and criminals rarely have access to them. The last time a British police officer was killed by a firearm on duty was in 2012, in a brutal case in Manchester. The annual number of murders by shooting is typically less than 50. Police shootings are enormously controversial. The shooting of Mark Duggan, a known gangster, which in 2011 started riots across London, led to a fiercely debated inquest. Last month, a police officer was charged with murder over a shooting in 2005. The reputation of the Metropolitan Police’s armed officers is still barely recovering from the fatal shooting of Jean Charles de Menezes, an innocent Brazilian, in the wake of the 7/7 terrorist bombings in London.

In America, by contrast, it is hardly surprising that cops resort to their weapons more frequently. In 2013, 30 cops were shot and killed—just a fraction of the 9,000 or so murders using guns that happen each year. Add to that a hyper-militarised police culture and a deep history of racial strife and you have the reason why so many civilians are shot by police officers. Unless America can either reduce its colossal gun ownership rates or fix its deep social problems, shootings of civilians by police—justified or not—seem sure to continue.

So far we have seen the Ferguson police lie about some basic facts in the death of Michael Brown and we have also become aware that, for whatever reason, details of Brown’s initial autopsy have been withheld from the family and the public.  This does not bode well for the prospect of a fair investigation by the Ferguson judiciary and the hope of justice for Michael Brown and his devastated family.

As awful as that sounds, the issues in Ferguson resonate nationally where young black men are being killed by police across the country; often in circumstances where the police have deployed military grade weapons and tactics.  This is about more than Michael Brown or Ferguson. this is about drawing a line in the sand and saying “No more racist police killings in the USA!”.