Theresa May has raised the UK government‘s official measure of the likelihood of a terrorist attack on British soil to “severe” from “substantial”.  Exactly what are ordinary members of the public supposed to do with that information?  There is nothing meaningful that any of us, at least those of us who bother to take note of these things, can do that we are not already doing – but it does make us fearful that the government may ‘know’ another 7/7 is about to cause death and carnage somewhere soon.

Since inception the threat level has never dropped below substantial

Since its inception in 2006, the threat level as assessed by the UK government has not fallen below “substantial” i.e. there is a strong possibility of a terrorist attack.

In terms of successfully completed Islamist extremist related attacks there has been only one – the Lee Rigby murder in Woolwich committed by two Muslim men with no existing links to organised terror groups at the time and at least one of which has serious mental health issues.

Figures from the Global Terrorism Database reveal that over the 10 years from 2004, there were 400 terrorist attacks in the UK, mostly perpetrated in Northern Ireland and almost all of which were non-lethal. According to evidence given by our security services to the Intelligence and Security Committee, as at November 2013, they and the police have “disrupted” 34 terrorist “plots” since “mid 2005” although they did not specify how many of the plotters were Islamic extremists.  It has also been revealed that they could have prevented the murder of Lee Rigby by arresting one of his killers, Michael Adebolajo, when he was arrested in Kenya under suspicion of planning to train with Al-Shabaab, a militant group linked to al-Qaeda.  However, instead of arresting him on his return to the UK, MI5 tried, unsuccessfully, to recruit him.

The recorded history of terrorism in Britain is overwhelmingly populated by incidents related to the Troubles in Northern Ireland.However, since the IRA began their bombing campaign on mainland Britain there have been several other murders which have been defined as acts of terrorism.  These have arisen from diverse communities but often they have been acts of individuals or small groups of men without formal links to specific known terrorist organisations but all were motivated by hatred of one form or another.

In the 1980’s there was the Iranian embassy siege, the bombing by the South African security services of the ANC office in London, the Animal Rights Militia letter bomb campaign, the Pan-Am –Lockerbie bombing, and the failed attack by Group Development Director for the British National Party, Tony Lecomber, after he was injured by a nail-bomb that he was carrying to the offices of the Workers’ Revolutionary Party. 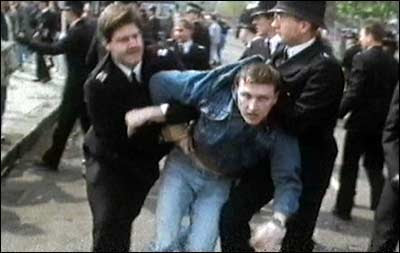 Former senior BNP member and friend of Nick Griffin, Tony Lecomber, is a man with a history of terrorism

In the 1990’s we had unattributed car bombings outside of a Jewish charity and the Israeli embassy, a fatal bombing of a Sikh newspaper’s office, and in 1999, BNP member David Copeland carried out a three week nail bombing campaign targeted at the black, gay and Bangladeshi communities in London and during which he killed three people and injured 139 others.

Apart from the IRA (including its splinter groups), 7/7 and the Woolwich murder, this century has seen only two other publicly known terrorist attacks that caused fatalities or injuries. The first was a letter bomb campaign in 2007 by a primary school caretaker, Miles Cooper, against companies that he accused of causing the rise of the “surveillance society” and “authoritarian” government. There were no fatalities but several people were injured.   Finally, between April and July last year Pavlo Lapshyn, a Ukranian student, murdered a Muslim man in Birmingham with a knife and then exploded two improvised bombs at separate Mosques. Although his bombs were powerful and could have killed dozens of civilians the police intervention and poor planning by Lapshyn meant that he failed to cause a single injury. Lapshyn told police his intention was to start a “race war”.

Of the publicly known failed attacks, there have been three widely reported Islamist failures including Operation Pitsford which caught 11 would be suicide bombers, the London “Tiger Tiger” car bombs which were carried out by one of the Glasgow airport attackers, and the 5 men who planned to attack members of the English Defence League but were caught when police discovered their weapons cache following a random traffic stop during which their car was searched as a result of the driver having no driving licence.

BNP member Robert Cottage: The largest amount of chemical explosive of its type ever found in the country was discovered at his home in a quiet tree lined suburban street in Colne

Less hysterically reported in the media were the failed assassination attempt on King Abdullah of Saudi Arabia and the former BNP candidate  and alleged co-conspirator and BNP supporter David Bolus Jackson who, according to police evidence, were caught with the “largest haul” of bomb making chemicals ever found in a domestic residence in the UK in Talbot Street, Colne in Lancashire.

The Talbot Street bomb makers case is instructive about the way the media has coloured the terrorism debate in the UK to focus exclusively on the possibility of Muslims committing terrorism rather than anyone else. Although the quantity of explosive material discovered in Talbot Street was record breaking and the other items in evidence included rocket launchers and crossbows the arrests of Cottage and Jackson were barely covered by any of the main news media.

“There was no coverage of the arrests on the BBC, and very little in the national papers, beyond a paragraph in “Newsbriefs” in The Sunday Times,[7] as well as socialist newspaper The Morning Star.[8]

It has been suggested that had the arrested been suspected Islamic extremists, rather than white extremists, the arrests would have been front page news immediately.[9][10] The trial itself, however, received more coverage in the mainstream media.”

There is no doubt that terrorism is an issue and that the public should be protected but when placed in an historical context the number of successful attacks in the UK in the last decade has been very low compared to the final decades of the last century.  As far as we have been allowed to know there has not been a significant increase in the number of attempted or disrupted terrorist attacks.  Now that the main IRA have ceased their military campaign it is probable that the realistic threat of a significant terrorist attack by a capable quasi-military group in the UK is lower today than at any time during the period of the IRAs mainland operations.

Again, given the historical context and using the government’s own threat level definitions, the relative threat level should, absent specific known planned attacks,  always be “Moderate” – an attack is possible but unlikely. That is what the evidence in the public domain tells us.

Yet, largely as a result of just two, albeit gruesome and shocking terrorist atrocities which were broadcast live to a worldwide audience, the UK and the US governments have undertaken the most significant curtailment of their citizens legal and civil rights alongside a massive expansion of their respective secret services powers to invade our privacy without any real accountability or oversight – that is in addition to the torture, conspiracy to torture, rendition and other crimes committed in our name.

We are repeatedly told by our government and media either directly or by implication to be terrified of the real danger of Islamist terrorism in the UK, based on two fatal acts of terror on the British mainland (only one of which was by an organised terror group). There have been as many attacks perpetrated by members of the BNP on the basis of race hatred and yet there is no call to proscribe their organisation or hysteria in the media about the BNP terror threat or a clamour to have Nick Griffin’s passport removed.

Despite the facts, we are terrified that a murderous act of Islamic extremism is at hand.

Happily for Ms May and David Cameron, fear works. Increased public fear is a direct result of raising the perception of the risk that we are all about to be beheaded live on BBC News 24.  A public terrified about imminent terrorism will swallow all sorts of intrusions into their privacy (see the recent foreshortened DRIP debate), curtailment of hitherto widely accepted human rights and even the suspension of parts of our legal system such as the right of a defendant to know the evidence that is being used against them.

So we cannot be accused of being a little paranoid if we can see a direct link  between the timing of the announcements about the threat level and Theresa May’s plans to remove citizenship from returning British “jihadis” and exclude them from the country. The government have denied that they are considering Boris Johnson’s suggestion of replacing the presumption of innocence with that of guilt for terror suspects but frankly given what has happened to date it is not outlandish to think that it could happen. 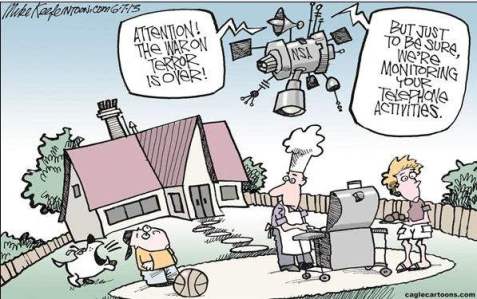 Using a phoney threat level to cow the public into fear-based jingoistic support for anti-libertarian Tory party policies is political cynicism in its lowest form.