In a typically headline grabbing piece of personal PR, Richard Branson used his invitation to talk at the Clinton Global Initiative in 2006 to announce what seemed to be a game changing act of selfless philanthropy.  The world was stunned when the billionaire pledged all profits from his Virgin air and rail interests over the next 10 years to combating rising global temperatures – a pledge that, he said, would be worth US$3bn.  So, with just two years to go, how has Branson’s promise panned-out?

Naomi Klein exposes Branson’s stunt for the PR puff that it was and explains that we cannot rely on billionaire philanthropy to save the planet. 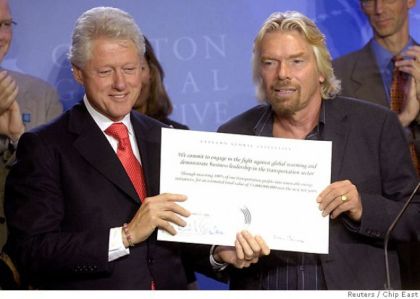 “In our desire to deal with climate change without questioning the logic of growth, we’ve been eager to look both to technology and the market for saviours. And the world’s celebrity billionaires have been happy to play their part.

In his autobiography/new age business manifesto Screw It, Let’s Do It, Richard Branson shared the inside story of his road to Damascus conversion to the fight against climate change. It was 2006 and Al Gore, on tour with An Inconvenient Truth, came to the billionaire’s home to impress upon him the dangers of global warming.”It was quite an experience,” Branson writes. “As I listened to Gore, I saw that we were looking at Armageddon.”

As he tells it, his first move was to summon Will Whitehorn, then Virgin Group‘s corporate and brand development director. “We took the decision to change the way Virgin operates on a corporate and global level. We called this new approach Gaia Capitalism in honour of James Lovelock and his revolutionary scientific view” (this is that the Earth is “one single enormous living organism”). Not only would Gaia Capitalism “help Virgin to make a real difference in the next decade and not be ashamed to make money at the same time”, but Branson believed it could become “a new way of doing business on a global level”.

Before the year was out, he was ready to make his grand entrance on to the green scene (and he knows how to make an entrance – by parachute, by jetski, by kitesail with a naked model clinging to his back). At the 2006 Clinton Global Initiative annual meeting in New York, the highest power event on the philanthropic calendar, Branson pledged to spend $3bn over the next decade to develop biofuels as an alternative to oil and gas, and on other technologies to battle climate change. The sum alone was staggering, but the most elegant part was where the money would be coming from: Branson would divert the funds generated by Virgin’s fossil fuel-burning transportation lines.

In short, he was volunteering to do precisely what our governments have been unwilling to legislate: channel the profits earned from warming the planet into the costly transition away from these dangerous energy sources. Bill Clinton was dazzled, calling the pledge “ground-breaking”. But Branson wasn’t finished: a year later, he was back with the Virgin Earth Challenge – a $25m prize for the first inventor to figure out how to sequester 1bn tonnes of carbon a year from the air “without countervailing harmful effects”. And the best part, he said, is that if these competing geniuses crack the carbon code, the “‘doom and gloom’ scenario vanishes. We can carry on living our lives in a pretty normal way – we can drive our cars, fly our planes.” The idea that we can solve the climate crisis without having to change our lifestyles – certainly not by taking fewer Virgin flights – seemed the underlying assumption of all Branson’s initiatives. In 2009, he launched the Carbon War Room, an industry group looking for ways that different sectors could lower their emissions voluntarily, and save money in the process. For many mainstream greens, Branson seemed a dream come true: a media darling out to show the world that fossil fuel-intensive companies can lead the way to a green future, using profit as the most potent tool.

Almost a decade after Branson’s epiphany, it seems a good time to check in on the “win-win” crusade. Let’s start with his “firm commitment” to spending $3bn over a decade developing a miracle fuel. The first tranche of money he diverted from his transport divisions launched Virgin Fuels (since replaced by private equity firm Virgin Green Fund). He began by investing in various agrofuel businesses, including making a bet of $130m on corn ethanol. Virgin has attached its name to several biofuel pilot projects – one to derive jet fuel from eucalyptus trees, another from fermented gas waste – though it has not gone in as an investor. But Branson admits the miracle fuel “hasn’t been invented yet” and the fund has since moved its focus to a grab-bag of green-tinged products.

Diversifying his holdings to get a piece of the green market would hardly seem to merit the fanfare inspired by Branson’s original announcement, especially as the investments have been so unremarkable. If he is to fulfil his $3bn pledge by 2016, by this point at least $2bn should have been spent. He’s not even close. According to Virgin Green Fund partner Evan Lovell, Virgin has contributed only around $100m to the pot, on top of the original ethanol investment, which brings the total Branson investment to around $230m. (Lovell confirmed that “we are the primary vehicle” for Branson’s promise.)

Branson refused to answer my direct questions about how much he had spent, writing that “it’s very hard to quantify the total amount… across the Group”. His original “pledge” he now refers to as a “gesture”. In 2009, he told Wired magazine, “in a sense, whether it’s $2bn, $3bn or $4bn is not particularly relevant”. When the deadline rolls around, he told me, “I suspect it will be less than $1bn right now” and blamed the shortfall on everything from high oil prices to the global financial crisis: “The world was quite different back in 2006… In the last eight years, our airlines have lost hundreds of millions of dollars.”

Given these explanations for falling short, it is worth looking at some of the things for which Branson did manage to find money. In 2007, a year after seeing the climate light, he launched domestic airline Virgin America. From 40 flights a day to five destinations in its first year, it reached 177 flights a day to 23 destinations in 2013. At the same time, passengers on Virgin’s Australian airlines increased from 15 million in 2007 to 19 million in 2012. In 2009, Branson launched a new long-haul airline, Virgin Australia; in April 2013 came Little Red, a British domestic airline.

So this is what he has done since his climate change pledge: gone on a procurement spree that has seen his airlines’ greenhouse gas emissions soar by around 40%. And it’s not just planes: Branson has unveiled Virgin Racing to compete in Formula One, (he claimed he had entered the sport only because he saw opportunities to make it greener, but quickly lost interest) and invested heavily in Virgin Galactic, his dream of launching commercial flights into space, for $250,000 per passenger. According to Fortune, by early 2013 Branson had spent “more than $200m” on this vanity project.

It can be argued – and some do – that Branson’s planet-saviour persona is an elaborate attempt to avoid the kind of tough regulatory action that was on the horizon when he had his green conversion. In 2006, public concern about climate change was rising dramatically, particularly in the UK, where young activists used daring direct action to oppose new airports, as well as the proposed new runway at Heathrow. At the same time, the UK government was considering a broad bill that would hit the airline sector; Gordon Brown, then chancellor, had tried to discourage flying with a marginal rise in air passenger duty. These measures posed a significant threat to Branson’s profit margins.

So, was Branson’s reinvention as a guilt-ridden planet-wrecker volunteering to solve the climate crisis little more than a cynical ploy? All of a sudden, you could feel good about flying again – after all, the profits from that ticket to Barbados were going to help discover a miracle green fuel. It was an even more effective conscience-cleaner than carbon offsets (though Virgin sold those, too). As for regulations and taxes, who would want to hinder an airline supporting such a good cause? This was always Branson’s argument: “If you hold industry back, we will not, as a nation, have the resources to come up with the clean-energy solutions we need.” It is noteworthy that his green talk has been less voluble since David Cameron came to power and made it clear that fossil fuel-based businesses faced no serious threat of climate regulations.

There is a more charitable interpretation of what has gone wrong. This would grant Branson his love of nature (whether watching tropical birds on his private island or ballooning over the Himalayas) and credit him with genuinely trying to figure out ways to reconcile running carbon-intensive businesses with a desire to help slow species extinction and avert climate chaos. It would acknowledge, too, that he has thought up some creative mechanisms to try to channel profits into projects that could help keep the planet cool.

But if we grant him these good intentions, then the fact that all these projects have failed to yield results is all the more relevant. He set out to harness the profit motive to solve the crisis, but again and again, the demands of building a successful empire trumped the climate imperative.

The idea that only capitalism can save the world from a crisis it created is no longer an abstract theory; it’s a hypothesis that has been tested in the real world. We can now take a hard look at the results: at the green products shunted to the back of the supermarket shelves at the first signs of recession; at the venture capitalists who were meant to bankroll a parade of innovation but have come up far short; at the fraud-infested, boom-and-bust carbon market that has failed to cut emissions. And, most of all, at the billionaires who were going to invent a new form of enlightened capitalism but decided, on second thoughts, that the old one was just too profitable to surrender.

Extracted from The Guardian 13 September 2014. The full article is available by clicking:
Naomi Klein: the hypocrisy behind the big business climate change battle