They say that the truth will out and it appears that ‘they’ are right. Two days ago, The New York Times revealed that Saddam Hussein did indeed have weapons of mass destruction in 2003.  They were discovered by American troops in 2004 but the soldiers’ success in confirming that Bush & Blair’s core reason for declaring war with Iraq was kept from the public.

An exposé from C.J. Chivers at The New York Times about chemical weapons found in Iraq incited a flurry of “I-told-you-so” reactions from right-wing pundits and observers. This in turn caused a flood of denying comments from liberal media.

In his investigative article, Mr. Chivers discusses the gradual discovery of thousands of chemical weapons, including warheads and shells containing mustard gas and sarin, by American and Iraqi troops after the 2003 United States invasion of the country.

The weapons were not part of massive, active stockpiles that the United States set out to destroy by waging a war that would last eight years, take thousands of lives and leave Iraq in chaos. They were “remnants of long-abandoned programs, built in close collaboration with the West,” Mr. Chivers writes.

“From 2004 to 2011, American and American-trained Iraqi troops repeatedly encountered, and on at least six occasions were wounded by, chemical weapons remaining from years earlier in Saddam Hussein’s rule,” the report says, detailing the stories of the wounded soldiers.

The Army kept a veil of secrecy over the discoveries and the medical issues suffered by the soldiers who were exposed to the nerve agents. Today, Mr. Chivers says, these “encounters carry worrisome implications now that the Islamic State, a Qaeda splinter group, controls much of the territory where the weapons were found.”

The reaction to the story from the right-wing was, perhaps, predictable: 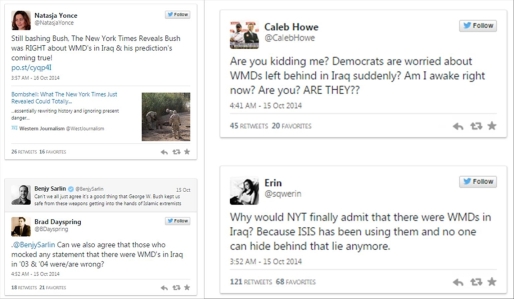 At The American Thinker, David Paulin writes: “How ironic that the left-leaning Times is presenting facts that are at odds with a favorite narrative of the anti-war left — namely, that the mendacious Bush administration had lied about the existence of W.M.D.s in Iraq.” 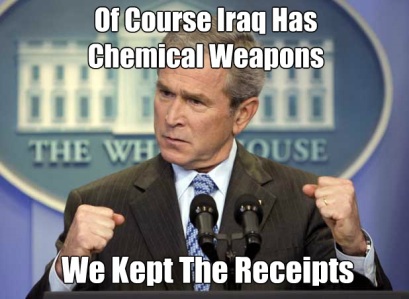 Reacting to the “we were right” claims, liberal media embarked on a fact-checking crusade, which resulted in a proliferation of negating headlines:

“No, There’s Still No Evidence There Was an Active W.M.D. Program in Iraq,” wrote Mother Jones.

“No, Bush was not right about Iraq: How conservatives misread new Times bombshell,” saidSalon.

“No, Chemical Weapons in Iraq Do Not Prove That Bush Was Right to Invade,” pointed out The New Republic.

“No, Iraq Didn’t Have ‘Weapons of Mass Destruction’ After All,” emphasized News Mic.

For one, commentators denying the claims of vindication (notably not coming from the mainstream right) repeat Mr. Chivers statement that these weapons were not the ones the United States were looking for.

“The discovery of old, degraded chemical munitions in Iraq is not news. The Bush administration went to warexpecting to find older weapons, along with a thriving new chemical weapons program (that didn’t exist),” says Simon Maloy at Salon.

At The New Republic, Jessica Schulberg writes that the existence of aging weapons was not the justification for the war. Or was it a secret? “The secret was the harm that they were causing to U.S. troops and the subsequent failure to care for these individuals.”

Most of these observers also point out that if indeed these discoveries would have been evidence of a W.M.D. program, those who waged the war would have been, as Kevin Drum writes at Mother Jones, “the first to trumpet the news.” They didn’t, and that should be “pretty plain evidence that there was nothing here to back up their prewar contentions of an Iraqi W.M.D. program.”

The reason the extent of the uncovered aging munitions was kept a secret, commentators point out, is embarrassment, as many of the weapons were manufactured with the help of the West and the United States.

“I can appreciate why the right is still a little sensitive on this,” says Steve Benen at MSNBC, in a more than tongue-in-cheek tone. “A Republican president lied the nation into a disastrous war, the consequences of which we’re still struggling to address, based in large part on weapons stockpiles that didn’t exist.” For Mr. Benen, it is not surprising that conservatives are still searching for a justification for the Iraq war.