“A council official was murdered days after he vowed to expose “horrible” people linked to a VIP paedophile ring, a witness has claimed. Detectives are investigating claims Bulic Forsythe was silenced by a children’s home vice ring said to have included a future minister in Tony Blair’s government.

A friend of Bulic, traced by the Mirror, said the social services manager at Lambeth council in south London confided in him shortly before he was murdered 22 years ago last month. The witness claimed: “I will never forget one evening in the pub when he told me and my wife: ‘There are some people in Lambeth Council who are doing really horrible, disgusting things and I am going to expose them. I won’t let them get away with it.’

The witness, a former para-legal, said he contacted the police with the information at the time. He claimed: “It was a very short conversation with no interest expressed by the police and no one ever called me back.”

He is the second person traced by the Mirror who says Bulic was living in fear before his murder because of what he had allegedly discovered at Lambeth council. A former female colleague said the social services manager had become aware of claims that children were being sexually abused at the South Vale children’s home.

A restricted document newly uncovered by the Daily Mirror shows officials in the Blair administration were aware in 1998 of claims the murder had been linked to a Lambeth paedophile ring and children’s home pervert John Carroll.

The memo, used to brief ministers in the Blair government in August 1998, stated: “There is an unsolved murder of [an official] which some staff in Lambeth believe is linked to paedophile activity, corruption and Mr Carroll. The police do not rule this out and are re-evaluating this and other serious crimes and incidents.”

Detective Clive Driscoll advised the murder investigation be reopened when he found potential links to his 1998 children’s homes probe in Lambeth. But Mr Driscoll was removed from the case after naming the Blair minister as a suspect and Bulic’s murder file has not been touched for 15 years. Scotland Yard finally began a cold case review 17 months ago following a Daily Mirror investigation. A spokesman said last month that they are still examining forensic evidence.

Kiddist Forsythe – born three months after her dad’s murder – believed he may have been targeted because of what he knew and she is urging the police to fully reopen the murder investigation. Bulic was last seen alive at 8.45pm on Wednesday, February 24, 1993.  A BBC Crimewatch broadcast five months later revealed that at 10am on the Thursday three official looking men were seen by a neighbour carrying files away from his flat in Clapham, South London. Two more men were seen in a car behind the property at 2pm. His bedroom was torched at 1am on Friday and the oven turned on. 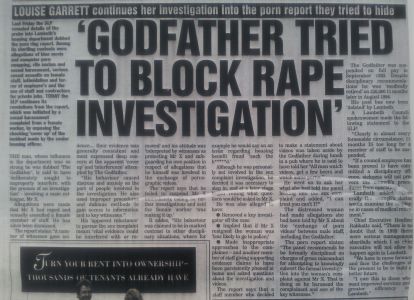 The report, signed by chair of the panel Eithne Harris, states: “The murder of Bulic Forsythe was seen by some witnesses as a possible outcome for anyone who strayed too far in their investigation or who asked too many questions.” Published internally in December 1993, it adds: “The panel heard evidence about BF [Bulic Forsythe] while he was working in Social Services, speaking to a colleague and telling her he was going to ‘spill the beans’. “Three days later he was killed.” This is not either of the witnesses traced by the Mirror. It states: “BF had allegedly expressed his fear of [council employee initials] to another witness who visited him. “He appeared very frightened to the witness. The witness at this point appeared fearful”

The report describes the atmosphere in the department as “one of intense fear”. Though the panel found no “direct link” between his death and work it said its evidence should be handed to police. Kiddist’s mum and Bulic’s widow, Dawn, 60, said: “I think someone wanted to shut him up.” Paedophiles abused children in Lambeth’s homes for decades. A former social services manager told Mr Driscoll in 1998 that she saw the future Blair minister making evening visits to the Angell Road children’s home in Brixton in the early 80s.

The home was run by John Carroll who was jailed for ten years in 1999 for sexually abusing a string of children.”