Jon Stewart‘s dissection of the way Fox News reported the Department of Justice investigations into former police officer Darren Wilson’s shooting of Michael Brown and the wider question of racism in the Ferguson judicial system with their misleading reporting of the tragic events in Benghazi over the last three years.

You are unlikely to watch a finer and more precise analysis Fox’s biased media reporting and hypocrisy anytime soon and, with The Colbert Report already at an end, you may well ask who else will be able to produce satire this good and keep tabs on Fox’s outrageous dishonesty once Stewart leaves the Daily Show in September? 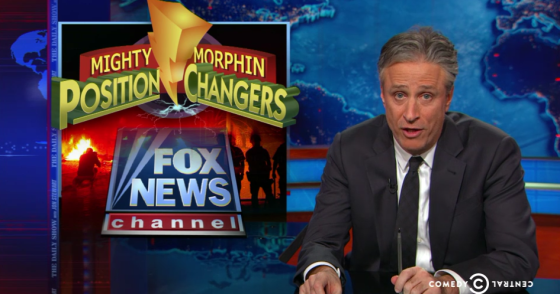 As previously reported by Inquisitr, the Department of Justice recently released a report exonerating Darren Wilson, the police officer who shot a black teenager in Ferguson, Missouri. The document seemed to justify Fox News reporting on the case, and in the past few weeks they have gone in for the kill.

They’ve called other media outlets’ coverage of Ferguson a “tsunami of misinformation,” at times shouting that the “hands up, don’t shoot” narrative that came to symbolize the case did not happen, a fact proved in the department’s report. Fox News pundits are now calling for an apology from the media outlets that shared in the fictional rhetoric behind the shooting.

Jon Stewart doesn’t deny any of this. The report is out, and Darren Wilson has now been exonerated for a second time. But, what about the federal documents that disprove Fox News’ false, often times hot-blooded, narratives surrounding other major news stories? Particularly, their coverage of the Benghazi incident?

As Jon Stewart points out, a federal report from the House intelligence committee – which is run by Republicans – exonerated Susan Rice, Hillary Clinton, and the White House of any incompetence or wrongdoing in the Benghazi incident that killed four Americans. The report also directly refutes many of facts that appeared on the cable news channel.

Jon Stewart summed up all of Fox News inaccuracies.

Jon Stewart goes on to say, with the help of pundit Megyn Kelly, the elements in Fox News’ Benghazi coverage were “a tsunami of misinformation, bone-headed non-fact based rhetoric.”

Yet, despite Fox News’ journalistic integrity in calling out other media outlets for inaccuracies on Ferguson, they’ve been conspicuously silent about the Benghazi report. Aside from a few attempts to poke holes in the House Intelligence paper, they’ve declined to really address it all.

Jon Stewart’s conclusion: Fox News owes its viewers an apology. According to Stewart’s logic, if liberal media outlets need to apologize for misinformation surrounding Ferguson, conservative media outlets should do the same for Benghazi, it’s only fair.

The Daily Show host is likely waiting for Fox News to officially present the House report and apologize for any inaccuracies on Benghazi, prompting liberal media outlets to do the same with Ferguson. But, Jon Stewart might be waiting for a long, long time.