Following the Paris attacks, right-wing parties across Europe and in the US used the fact that one of the perpetrator’s appeared to have gained access to France by claiming he was a refugee to argue that all refugees were possible terrorists – a patently cretinous claim to make and one that was picked-up by John Oliver on Last Week Tonight.

“John Oliver has – yet again – eloquently and hilariously torn down the stupidity and ignorance surrounding one our most pressing issues.

This time it’s the turn of the Syrian refugee crisis.

More specifically, the completely irrational reaction to it in the United States which has been characterised by a seeming war of words between wannabe and actual politicians to see who can say the most outrageously unfounded soundbite possible. 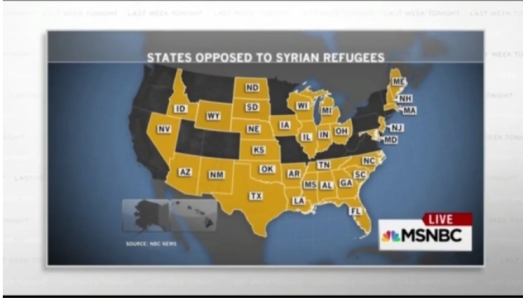 On his show, ‘Last Week Tonight’, Oliver simply and succinctly dissects these arguments, most notably countering those who claim a terrorist could easily infiltrate the US by posing as a refugee.

“If you’re a refugee, first you apply through the United Nations High Commissioner for Refugees, which collects documents and performs interviews. Incidentally, less than 1 percent of refugees worldwide end up being recommended for resettlement. But if you’re one of them, you might then be referred to the State Department to begin the vetting process.

“At this point, more information is collected. You would be put through additional screenings by the National Counterterrorism Center, the FBI, and the Department of Homeland Security. And if you’re a Syrian refugee, you’ll get an additional layer of screening called the Syria enhanced review, which may include a further check by a special part of Homeland Security, the USCIS fraud detection, and national security directors.

“And don’t relax yet ’cause we’ve barely even started. Then you finally get an interview with USCIS officers, and you’ll also be fingerprinted so your prints can be run through the biometric databases of the FBI, Department of Homeland Security, and the Department of Defense. And if you make it through all that, you’ll then have health screenings — which, let’s face it, may not go too well for you, because you may have given yourself a stroke going through this process so far. But if everything comes back clear, you’ll be enrolled in cultural orientation classes — all while your information continues to be checked recurrently against terrorist databases to make sure that no new information comes in that wasn’t caught before.

“All of that has to happen before you get near a plane. This process typically takes 18 to 24 months once you’ve been referred by the UN to the United States. This is the most rigorous vetting anyone has to face before entering this country. No terrorist in their right mind would choose this path when the visa process requires far less effort.”

See? It really isn’t that simple.”