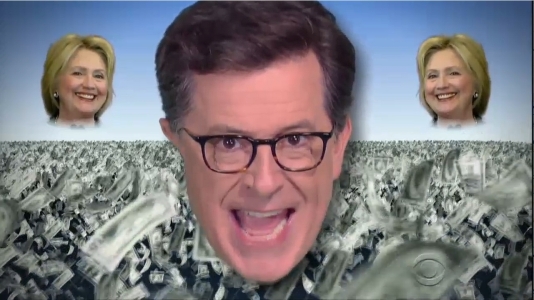 But Colbert largely ignored Clinton in his monologue, choosing to make light of suggestions that the Democratic National Committee was unfairly biased in supporting her over Sanders in this year’s bruising primaries. “In an unprecedented show of bias, the Democrats threw their weight behind a registered Democrat,” Colbert joked. “That’s like Sam’s Club refusing to take your Blockbuster card.”

The late-night host teased irate Sanders supporters and poked fun at DNC Chair Debbie Wasserman Schultz and Melania Trump. As the screen flashed photos of teary-eyed Sanders fans, Colbert declared, “I have not seen that many crying women since Bernie opened for the Beatles.”