I won’t give my name – my family isn’t even aware I’m writing this and I wish to protect them. But I have a funny feeling you’ll know who I am.

At school, at Dulwich College in the late Seventies, we were close friends in our teenage years. I stayed at your house once – your mother did do a fantastic great British breakfast for us.

I remember the way you enchanted people at school, senior teachers and fellow pupils alike. Your English project on fishing enthralled everyone. I remember mine being particularly boring. You were and are a great speaker, for sure.

But I also remember other, darker things about you. There was a time when I used to look back and dismiss much of them as the amusing naughtiness of teenagers as we were, much like our old headmaster David Emms did.

I haven’t chosen to write before, but I simply have to now. I now wonder if there is a connection between you at 16 and you at 52. I don’t believe you have fascist sympathies now, but there are things that tell me your views might not have changed that much despite the many years.

I think there comes a time – however difficult it may be – when enough is enough. I remember those school days in the UK. As you know, teachers were concerned. You’ll remember being confronted three years ago by journalists who had a letter from the school teacher Chloe Deakin to Mr Emms. You’ll remember she was concerned about “fascist views”. Other teachers also had concerns, but none of them would have known you like your own peers, the friends you used to spend time with.

We hear much of “due diligence” in today’s financial world, but had the teachers and headmaster of Dulwich investigated the concerns around your appointment as a prefect with your peers – as they would hopefully today in similar circumstances – they might have made a very different decision. They might not have brushed them under the carpet; they might have made you think a little more about your rhetoric; history might be a little different today. 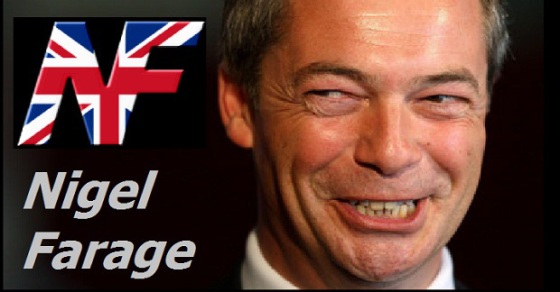 For I vividly recall the keen interest you had in  two initials of your name written together as a signature and the bigoted symbol that represents from the many doodles over your school books. Nigel Farage, NF, National Front. I remember watching you draw it. Just a laugh, eh, Nigel?

As the son of an immigrant family, your frequent cry of “Send em home” and mention of the name Oswald Mosley didn’t mean much to me either until much later when I learnt of the British Fascists.

I remember you spending hours with spit and polish producing what were unquestionably the brightest pair of CCF (Combined Cadet Force) army boots in school. I also remember your snuff tobacco that you kept hidden from unwitting teachers.

But I also remember something altogether more alarming: the songs you chanted at school. In her letter Chloe Deakin mentioned reports of you singing Hitler Youth songs, and when you were confronted by that, you denied it.

But I do remember you singing the song starting with the words “gas them all, gas ‘em all, gas them all”. I can’t forget the words. I can’t bring myself to write the rest of it for it is more vile that anything the teachers at Dulwich would ever have been aware of.

I too think that things can be in the past and that people grow up from being naughty schoolchildren. Heaven help us if they didn’t, let’s face it, but heaven help us if we believe all children do.

As someone wanting the EU to be challenged more robustly, I found myself thinking “Good on Nigel” for the amusement your speeches in the European Parliament gave us. Let’s face it, mass migration and its management by the EU has been a consistent mess of mixed messages. You’re absolutely right to challenge the EU – it’s just people need to see the full picture — before aligning themselves to strangers, however charming their messages are.

From being a real fan, I found myself thinking more and more with every appearance of yours on television that we must be aware of false prophets. Notably, the image of a desperate line of refugees, photographed not even in England, showed me that Nigel Farage has perhaps not changed that much. 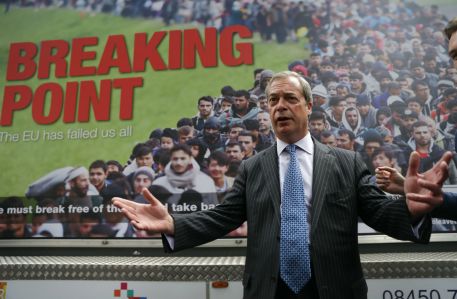 These people were used as live currency to further your cause to represent Britain being at breaking point from European immigrants – although those people were from outside of Europe. The imagery of a loss of control, hopelessness, of our own politicians not caring for us is the stuff of two world wars. I can hear you say “useless” in the way you used to.

As I have said, the immigration issue surely needs fixing, but you have shamefully used this picture.

Seeing your gloating display post-referendum at the European Parliament just rammed home the point: it seemed here we had a bit of the Nigel I knew at school. Yes, you’ve fought 20 years and no one took you seriously – but let us have some humility. We now learn you will start touring other EU countries, beginning in Athens in September, to encourage them to follow your lead. I’m sure the neo-Nazis in Golden Dawn in Greece will cheer you loudly. The people of Greece, beware.

Oh, for the record, I’m not a blind Remainer. I’m more a 51 per cent reluctant Remainer. Yes, I see the many 21st century challenges with which the EU has failed to deal – immigration and “over-involvement” being the most obvious.

But then again, don’t some politicians use the cover of people’s strife for their own gain or beliefs? Would we as a nation not be alarmed if we were to find out that a Muslim politician or teacher for example had made reference to forced repatriation or joked about beheading all non-Muslims as a teenager at school? Let’s hope schools are now taking action on the kind of comments you made at school.

I’m also not a perfect person. I too couldn’t help thinking “must we have quite so many people coming to Europe”.

But let me indulge you in a story. On a recent trip to Berlin, I found myself in a wonderful park in Spandau on the banks of the Havel.  It was a windy day and a chap next to me was meticulously laying out some papers on a bench. But then a gust of wind sent them a few metres, happily straight into my hands.

He was incredibly grateful and strangely offered me some orange juice and a banana. I felt a little embarrassed.

And then I realised the papers on the bench were in fact asylum papers and the orange juice and banana in a park in Berlin meant more to him than I could ever imagine. He was a teacher of physics or something similar; it was the only thing I could deduce from his broken English.

I tried a little German but to this he just shrugged his shoulders and gave a hopelessly lost smile. He was a Syrian filling out papers for his family and, had my appointment contact not have arrived a few minutes later, I could have spent all day right there.

Perhaps he was in that infamous Leave poster you exploited to such effect? It’s easy to tar everyone with the same brush just because of a few criminals.

But neither am I someone with rose-tinted spectacles. Although this meeting in Berlin was a wake-up moment for me, I also know there are serious issues for Europe to solve. We really have been let down by our European leaders.

Perhaps people found no other way to represent their dissatisfaction with Europe and the very many things that need fixing other than embracing you? Is it our fault? No, sorry, there’s never an excuse for whipping up some racial animosity as a means to an end.

I think you’re a troublemaker. You were at school, you are now. But we need to beware of what’s whipped up.

In April 1981, we had the Brixton riots. They happened just up the road from our school. The images of rioting people, many of them from the racial minorities, made it easy to discriminate; many people did back then. The National Front was hugely popular by comparison to today. So, turbulent times back then… but have you not moved on?

I agree with you there are historic dates that change lives. I stood on the Berlin Wall on that wonderful day in 1989 and have 8mm ciné film I took that never fails to choke me:  the images of euphoria, loud noise and waving flags of all colours.  Those are real celebrations – and for good reason. I congratulate the German people on their achievement in integrating two by then divergent cultures. It has taken decades rather than the few years Helmut Kohl predicted, but from mutual animosity and envy on both sides, today the country bears little evidence of physical or societal difference.

After the referendum vote, you called for an “independence day” to mark the result.  It’s an insult those good people in the real world who have died fighting real struggles for independence. I hope the nation sees just as I do that we have allowed ourselves to be enchanted by the charismatic and populist against plainly obvious EU failings without any real thought as to the background and objectives of the people delivering the messages.

Published in The Independent