Is there a job worse than being a surrogate for Republican presidential nominee Donald Trump? Trevor Noah doesn’t think so. On last Monday’s episode of Comedy Central’s “The Daily Show, Noah expressed heartfelt sympathy for the people whose job is to defend Trump’s often-contradictory positions.

“I really feel sorry for … all of Donald Trump’s surrogates because that has to be the hardest job in the world ―even harder than being a DJ at a bar mitzvah.”

Trump surrogate: “the hardest job in the world”

As Noah points out, a surrogate’s job is to defend anything said by the candidate, even if that candidate is Trump insisting that he seriously thinks Obama is the founder of ISIS on one day, and then claiming he was being sarcastic a few days later.

That caused such confusion for his surrogates that when Trump spokesman Katrina Pierson was asked if her boss really meant his allegation, she was forced to say, “Yes and no.”
(Huffington Post) 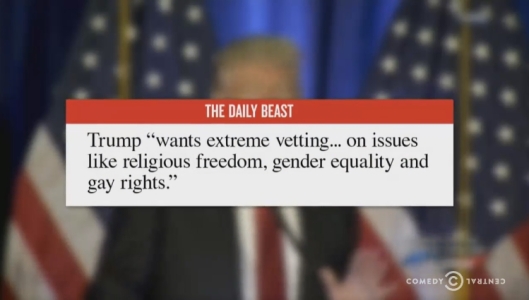 As the week progressed, Trump returned to his go to rabble rousers – immigration and Muslims.

“As soon as Donald Trump proposed an ideological purity test for immigrants to the United States, the questions started flying. What exactly would this test involve? How and when would it be administered? Couldn’t people just lie to pass this test? Could Donald Trump pass this test?

The Daily Show couldn’t quite get hold of Trump to give him the final exam, but they did talk to some of his supporters. All of them thought this “extreme vetting” was a good idea—until it was time to actually answer some of the questions.”
(Esquire.com) 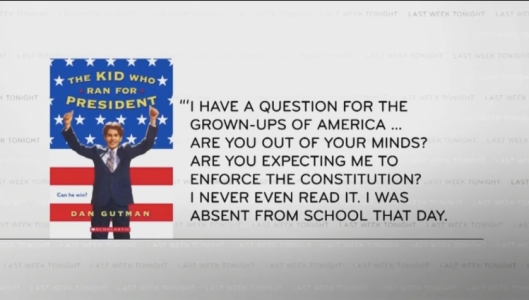 On Sunday it was John Oliver’s turn to give some friendly advice to The Donald.

“Donald Trump is in a bit of a pickle. As the November election creeps ever closer, the presidential candidate now faces two equally unpromising possibilities: Either he loses to Hillary Clinton, forever tarnishing the Trump brand, or he wins the election and then has to actually serve as president of the United States. (Face it, distributing disaster relief and making nice with foreign politicians just isn’t his style.)

John Oliver understands Trump’s dilemma, and on Sunday night he decided to set aside his many, many, many quarrels with the Republican nominee to offer him some direct advice: “I know that you’re watching, Donald, because you watch everything that’s said about you. I’m pretty sure you sleep in a tanning bed made out of cable news talking about you.”
(Slate.com)