For three weeks in the aftermath of the disappearance of flight MH370 we were on the receiving end of saturation coverage of the tragedy by global news organisations, often at the expense of reporting more important national and international events. This would be barely acceptable if there were significant developments in the MH370 story beyond “a plane with over 200 passengers and crew has disappeared” but these have been almost non-existent.

The demand for content to fill a rolling twenty-four hour news cycle means that the mysterious disappearance of a plane and its passengers was always likely to become the subject of endless, often moronic and insensitive, speculation. 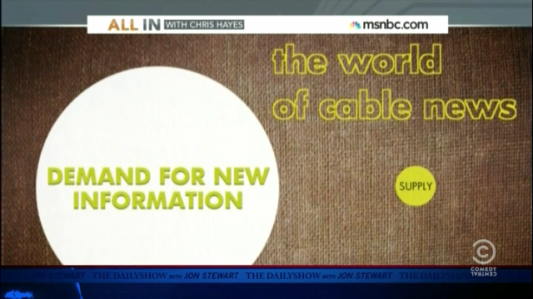 CNN, driven on by a MH370 spike in its viewer ratings in a key advertising demographic, has outstripped all other purveyors of news with the quantity and (lack of) quality of its own speculative bubble.  In a series of unedifying broadcasts CNN invited the public to pose possible explanations to ‘experts’ for consideration.  So we had various theories such as a Bermuda triangle scenario, a mini black hole, the value of psychic help and the possibility that life has imitated art with the TV show ‘Lost’ as the main artistic reference thrust into our midst as if they were valid and valuable contributions deserving of consideration.

Fox News used the fact that MH370 was carrying mostly Muslim passengers and an entirely Muslim crew to imply that an act of Islamic terrorism was a likely explanation for its mysterious disappearance.

Rupert Murdoch, owner of Fox News, has his own anti-Muslim agenda which goes some way to explaining the Islamaphobic slant in Fox’s ‘news’ reporting.  Fox’s ‘terrorist’ theory will have been readily accepted as ‘fact’ by much of its audience who have been primed by years of Fox’s Islamic terror hyperbole. That is probably why they did not mention in their report that Malaysia is a Muslim country and that hundreds of planes containing thousands of mostly Muslim passengers and crew fly without incident every single day.

Any news organisation worthy of the title inevitably carries a great burden of responsibility for reporting events in a factual and objective way because effective public discourse requires an informed citizenry.  Irresponsible media speculation and disguised opinion pieces can be (and often are) consumed by the public as if they were news. So it is hardly surprising that many of us are confused by the often contradictory facts and opinions that are served-up to us as ‘news’ on a daily basis.

Viewer ratings have become a measure of the ‘quality’ of our news broadcasts.  This erroneous belief combines with the worst part of our human nature producing the well-known newsroom saying “If it bleeds it leads.”  From a news editor’s perspective the perfect news story is when one of us, preferably a celebrity, is in a life-threatening situation or has been hideously slaughtered. That is when ratings peak. That is why MH370, drowning Korean school kids and the Oscar Pistorius trial have led news bulletins around the globe for the last two months.

News is not, and should never be seen as entertainment; nor should its quality be judged simply by readership or viewer ratings. Yet as the Pistorius carnival has shown, the public’s desire to rubber-neck is unlimited and this human weakness is being used by pay TV channels to make a quick buck.

The Madeleine McCann case is another example of a disturbing human tragedy being used by the news media as a tool to gain audience numbers whilst paying scant regard to the central facts or the psychological and emotional trauma that their obtuse reporting may cause.

Whether it’s MH370, Pistorius, the McCanns or another of the seemingly endless human tragedies reported by our 24 hour news media, the race to the lowest ethical rung on the ladder appears to have no nadir so long as there is money to be made.  It is time that responsible broadcasters paid more than mere lip-service to the journalistic ideals of objectivity and reporting of events as they are rather than as media barons would like them to be.  Speculation is not and never has been news but, in the current climate, ethical reporting would be!