This blog post was intended to express how this proud Briton had become ashamed of our political leaders and many of his fellow countrymen as a result of the gutter into which we have all been dragged by UKIP and their ugly racist rhetoric.  It remains my intention to write that post but my feeling of shame was overwhelmed last night when I watched this report from Channel 4 News about the thousands of refugees who are drowning in the Mediterranean Sea and will continue to die as a direct result of David Cameron‘s UKIP inspired policy decision to “let them drown.” 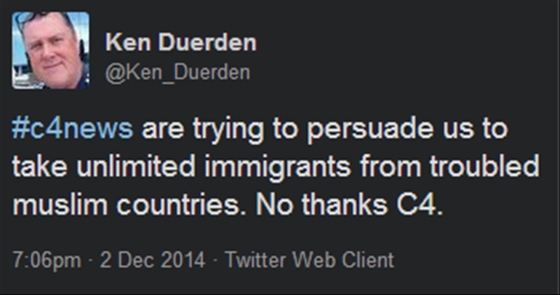 My blog, twitter account and YouTube channel are often trolled by UKIP supporting racists but my response hitherto has been one of sympathy for their lack of human empathy.  Today with the true scale of the horror that their political hatred has brought upon these innocent refugees fleeing from war and racism in their own countries it is now clear where the UK’s real path will end if we continue to allow UKIP’s brown shirts to dictate the policy debate for the next 5 months.

British war poets romanticised the attraction of a “Blighty” wound: a non-life-threatening injury considered serious enough to merit a safe passage home. The term was used during the First World War when personal calamity, sometimes self-inflicted, offered the chance of a state-aided future in a land fit for heroes, well away from the mud and slaughter of a foreign field.

The macabre notion sprang to my mind last week when, a century after the start of that savage conflict, officials suggested that desperate migrants were deliberately risking a “Blighty” as they tried to enter Europe illegally. Those who boarded boats skippered by people smugglers to get across the Mediterranean were, it was argued, actually hoping to get into grave difficulty, so as to be rescued and then fast forwarded to their desired asylum destinations, including the UK.

Hundreds of thousands have embarked on the sea crossing this year alone, with many picked up by the Italian navy as part of its country’s Mare Nostrum (“Our Sea”) initiative. Many of them have died, or been horribly wounded, but evidently not enough to move the British government. It is convinced that a humanitarian operation aimed at rescuing people is actually motivating them to travel in the first place and should thus be abandoned.

Baroness Anelay, the Conservative foreign office minister, told the House of Lords that the mission should be dropped because it was “encouraging more migrants to attempt the dangerous sea crossing and thereby leading to more tragic and unnecessary deaths”.

The flaws in such thinking might have been clear to Lady Anelay if, like me, she had met some of the surviving victims of last year’sLampedusa shipwreck in which at least 360 people died. As well as the psychological trauma of seeing loved ones, including young children, perish around them as all struggled to stay afloat, many had suffered severe burns caused by diesel fires and lung and gastric infections, to add to a long list of other injuries and ailments.

It was the unbridled horror that unfolded off the coast of the Italian island in 2013 that directly led to Mare Nostrum, but hugely perilous migrant sea crossings continue despite such shipwrecks, not because of them. Personal disfigurement, psychological agony and mass bereavement are, in some cases, certainly a price people would willingly pay to achieve a fresh chance in life in a foreign country.

Where Lady Anelay and her ministerial colleagues get it wrong is in their depiction of migrants as desperate, broken victims who have nothing to offer. Such woefully misguided reasoning was articulated by Natacha Bouchart, the mayor of Calais, in the House of Commons last week, when she said that the migrants queuing up in her port to hide on Dover-bound lorries were “prepared to die” to reach “the weekly benefits of £36 that are given to migrants or asylum seekers” by Britain.

Referring to a British El Dorado, Bouchart declared that social security payments, free homes and undeclared cash in hand were the dynamic of global migration in the 21st century. The logical response, according to this miserably insular, unambitious view, should be police crackdowns, tougher border controls, deportations and a host of other repressive cliches, up to and including leaving drowning migrants to sort their own problems out.

Rather than immigration from war-torn countries being motivated by the promise of state handouts, most of these risky journeys represent a powerful determination to overcome adversity, no matter what the danger. The majority of those boarding leaking Mediterranean boats or sleeping rough at the start of another Pas-de-Calais winter want to be members of a functioning society to which they can contribute.

It is politicians, suggesting that people aspire to the promise of £5.14 a day, perhaps supplemented by a few pounds a week on the black market, who forge the stereotype of migrants as parasites. The rabble-rousers display no interest in people’s “back story” – the experience of war or persecution shared by those dislodged from Africa, and those who come from countries such as Afghanistan, Iraq and Syria. Instead, all are blamed for the “swamping” process, also levelled at a host of other undesirables, ranging from “health tourists” to criminal gangs from the old Iron Curtain countries.

The truth is that Britain is not a racist country and the prejudiced rhetoric increasingly prevalent among representatives of both established and marginal parties does not reflect the popular view. In fact, the UK has always been admirably welcoming. The terms being used by politicians have no place in a richly diverse nation moulded by centuries of immigration.

As a French national whose background involves immigration from decolonised Algeria, I feel that Britain is certainly more tolerant than France. There the Front National, whose founder and leading MEP is a convicted racist and antisemite, is accepted as a mainstream party with the potential to supply a president. It is a country where Manuel Valls, France’s then nominally socialist interior minister, last year calmly suggested that the solution to illegal camps and street crime was to deport all Roma Gypsies because they have no hope of “integrating”, adding: “We are not here to welcome these people.” Soon after his overtly racist statement about mainly EU passport holders, Valls was appointed prime minister.

The Tory defence secretary, Michael Fallon, last week used the word “swamped” in relation to eastern European immigrants and, despite apologising, was praised by former Labour home secretary David Blunkett, who said Fallon was voicing the “concerns of ordinary voters”.

The reality is that “ordinary voters” have always offered a place in British society to the downtrodden underdog – ones who want to start a business, to train as medics, to serve their new communities. There are all kinds of opportunities for those prepared to work. The country is by no means a “magnet” for refugees anyway: it received just under 30,000 asylum applications in 2013. France had more than double that number and Germany more than five times.

As throughout history, those displaced from their own societies – for whatever reason – seek a haven where they can prosper. Those who wrote about the “Blighty” wounds so eloquently also evoked the small-town nationalistic hatreds that contributed so much to the slaughter of the trenches. There is nothing wrong with patriotism, or a sensible immigration policy, but when government ministers display a callous disregard for drowning migrants they have clearly lost all sense of what being British really means.