What do you think of when you hear the words “think tank”?

For those who have only a passing interest in the world of politics, which is most of us, the words are likely to indicate a gathering of highly intelligent boffins who spend their days cogitating on data and researching things that they hope will make everyone’s lives better.

Those people are, in the main, wrong.

If this is your idea of a think tank, think again

While some think tanks are engaged in apolitical, independent research, many (and certainly most of those that we know through their ubiquitous appearances in the media) are not. There is a group of self-proclaimed experts whose aim is to manufacture as much ‘evidence’ as possible in order to justify what would otherwise objectively be considered illogical and even anti-social ideological positions. Although these organisations trade under the impressive sounding title of “think tanks” they are often funded by a small group of ultra-wealthy people and corporate interests.
In addition, they spend a great deal of time as a “negative force” in critical debates by attempting to undermine their opposition by sowing seeds of doubt about their evidence and attacking the individuals making the case. This is where the merchant of doubt tag arises.
© Democracy Now!

They are everywhere, putting forward extremely niche viewpoints and yet given a platform in the media and especially on the BBC to propagate their perspectives. Their mercenary strategies range from the complex to the extremely simple and have even been co-opted by political parties, as we saw with tobacco lobbyist and Conservative party election strategist Lynton Crosby‘s use of a ‘dead cat’ during the 2015 general election campaign.

Think tanks exist across the political spectrum but there is a reason that it is those representing right-wing perspectives that overwhelmingly seek to hide their sources of funds (and thus their true raison d’etre) from public scrutiny. 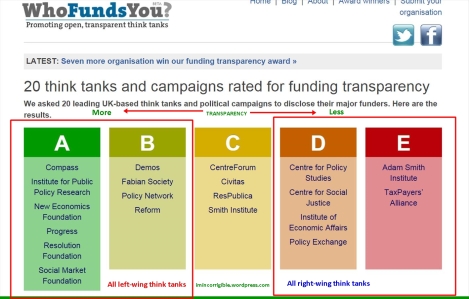 “If you can do ‘tobacco’ you can do just about anything in public relations” says one particularly cynical lobbyist in Robert Kenner’s “Merchants of Doubt” and Lynton Crosby appears to be living proof of that claim. Kenner’s movie shows how secretly funded think tanks and lobby groups have perverted public policy over decades and resulted in, among other things, significant confusion about issues that ought to have been agreed upon years ago like gun control and climate change.

While these sectional interests benefit from the flood of misinformation and skewed interpretations of their output, in the end, and as you probably have come to expect, it costs us all far more than money, all too frequently, it results in real human suffering.

Merchants of Doubt Part I