“All journalists are manipulated and all politicians lie.”

It would take an Olympian level of mental gymnastics to challenge the obvious truth of Judith Miller’s proposition and, given the cynical delay of the UK’s own Chilcot inquiry and the blatant lies spewed upon us for the last six weeks as part of our British general election, what would really be the point?

Notwithstanding the clear editorial bias displayed by our national print news media, we still rely on them to hold our governments to account and, at least try, to challenge the often faux orthodoxy that the state uses and abuses in order to corral us into accepting the darkest of their machinations. 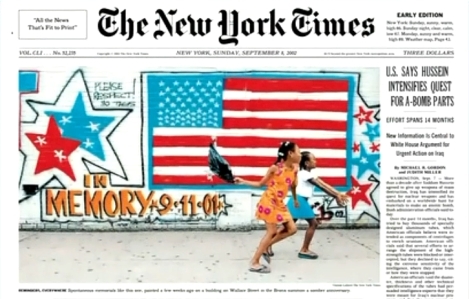 So it was for former New York Times journalist Judith Miller who found herself being gently eviscerated by Bill Maher and then ripped a new one by Jon Stewart on the Daily Show, for her reporting of Iraq’s alleged weapons of mass destruction in 2002, and providing the narrative that helped “fuel the momentum for war”.

“I believe that you helped the administration take us to the most devastating mistake in foreign policy that we’ve made in, like, 100 years,” Stewart said, adding, “but you seem lovely.”

Due to copyright restrictions to watch the clip you need to type or copy and paste the password: imincorrigible

In 2002, the New York Times ran a front-page story co-written by Miller about Saddam Hussein stepping up his pursuit of atomic-bomb parts. Key figures in the Bush administration such as Donald Rumsfeld would go on to cite the report as proof that Hussein posed an immediate danger, further supporting the case for war.

“The intelligent sources we were talking to had never been wrong before,” Miller said. “The information came from the men and women who had steered me right on al Qaeda and 9/11.”

Stewart fired back during the heated back-and-forth exchange:

“I think it was a concerted effort to take us into war in Iraq. You had to shift, with energy, the focus of America from Afghanistan and al Qaeda to Iraq. That took effort. Somebody pointed the light at Iraq, and that somebody is the White House, and the Defense Department, and Rumsfeld. He said right after 9/11, ‘Find me a pretext to go to war with Iraq.’ That’s from the 9/11 papers and the study.”

When asked whether she felt she had been manipulated, Miller responded, “all journalists are manipulated and all politicians lie.”